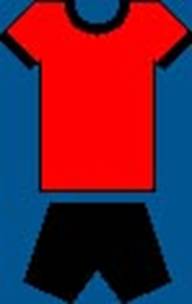 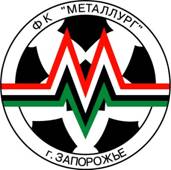 United kicked off their UEFA campaign with a visit from Ukrainian club FC Metalurh Zaporizhzhya and it was a case of “after the Lord Mayor’s show”, as United returned to their underachieving ways, after their high of defeating Manchester United the previous weekend. The expected goal avalanche never happened as United were extremely slow out of the blocks and poor finishing, and an outstanding display by the visiting keeper, restricted the score. Ian Harte’s radar was off beam and Mark Viduka received little support or decent service. It was left to the appearance of Michael Bridges, after an almost two year layoff from injury, when replacing Mark Viduka after sixty-five minutes, to spark United into the lead, as he held off a challenge to set up the winner for Alan Smith with ten minutes to go. The visitors came with a ten man defence and Robinson was not called upon to exert himself. A single goal lead was scant reward for their dominance but the Ukrainians must attack in the return and maybe it will leave them exposed at the back.

New Leeds boss marked his first game in Europe with United with a victory, but would have been disappointed with the score and his teams general performance, only the returning from long term injury Michael Bridges gave him a high spot in a game that had few highlights. It was a case of after the Lord Mayor's show at as Leeds United's UEFA Cup campaign stuttered into life with a narrow victory over the competition's minnows. Man of the moment Alan Smith spared United's blushes against struggling Ukrainian outfit FC Metalurh Zaporizhzhya with an eightieth minute strike to give them the upper hand in the tie. The goal was no more than deserved, but after high quality performances against Newcastle United and Manchester United the faithful could be forgiven for feeling short-changed. The performance never came close to those produced in the previous two Premiership outings and, for the biggest part of what was an awful contest, United looked well below par. The passing was sloppy and the delivery of crosses was disappointing as United lacked the killer instinct required to breakdown the determined Ukrainians. The predicted goals avalanche never looked like materialising after Leeds started the game at a snail's pace, and one could only wonder what the outcome would have been had United gone for the jugular from the off.

Zaporizhzhya were certainly vulnerable, but didn't ask enough questions early in the contest and Metalurg were allowed a fairly easy ride for the first hour. However, despite a lack-lustre display should still have won by more than the single goal margin, but a combination of poor finishing and some goalkeeping heroics by Andriy Glushchenko kept United at bay. Smith was United's biggest threat throughout, but the majority of chances fell to full-back Ian Harte, who endured a frustrating night. Harte's radar was off target in dead-ball situations and when he found himself in space with a clear header on goal Andriy Glushchenko pulled off an outstanding save to thwart the Irishman. Mark Viduka spent much of the contest starved of service, under the shackles of Mario Dodic, and it wasn't until Michael Bridges' arrival midway through the second half that United seemed to find their spark. Bridges was making his first senior appearance for almost two years and the young striker acquitted himself well in what was threatening to become a tricky situation.

The unambitious visitors actually had more shots on target in the first half, but they were restricted to long-range efforts and Paul Robinson spent much of the game as a spectator. Unsurprisingly, the Ukrainians came to defend and with ten men behind the ball for much of the contest and it was up to to find a way through. Sadly, it took a full fifty-four minutes before United showed any real urgency about their play and, even when they did up the tempo it still took another half- hour to finally get their noses in front. A spell of concerted pressure failed to produce anything for and, with lady luck favouring the visitors, a European shock looked on the cards for Terry Venables' side.

Lee Bowyer and Eirik Bakke both ran their hearts out in the middle of the park, but all too often the final ball either went astray or was deflected to safety. Zaporizhzhya's game plan was to frustrate, but the Ukrainians showed a great work rate and frequently closed men down quickly enough to thwart any attacking raids. The visitors were also intent on wasting as much time as possible and the referee could have booked more than one player for winding the clock down before the deadlock was finally broken. As the game wore on did assert their authority more. They were always in control and the home side slid effortlessly into second gear in a bid to end the visitors' resistance. Harry Kewell's downward header was beaten away by the keeper while Alan Smith and Eirik Bakke also fluffed headed opportunities. But finally got their noses in front with just ten minutes remaining when Michael Bridges fought off the challenge of Oleg Raty and teed up Alan Smith with an easy chance to score. It was too late for the floodgates to open then, although twice came close to adding to the tally.

Ian Harte saw a vicious effort fly inches over the bar while Lucas Radebe's spectacular volley was well saved by the impressive Andriy Glushchenko. The Ukrainians did mount a couple of late raids of their own but, in keeping with the rest of the contest, they never seriously looked like hurting and there was no question of a shock equaliser. At the whistle the celebrations were muted. It was a game couldn't win no matter what they did, but they had failed in their objective to put the tie beyond doubt. It would now be a cautious United side that travel out to the Ukraine a fortnight later for a potentially nervy tie, but the onus would then be on Zaporizhzhya and it would be interesting to see how they fared. They showed no ambition on the night and lacked quality, and Venables' side would have to make the long trek knowing they were still favourites to reach round two. 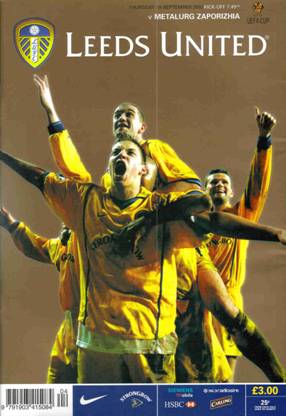 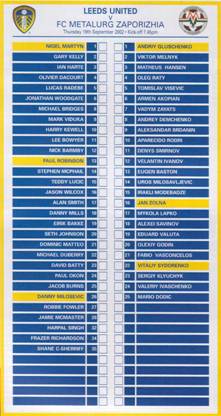 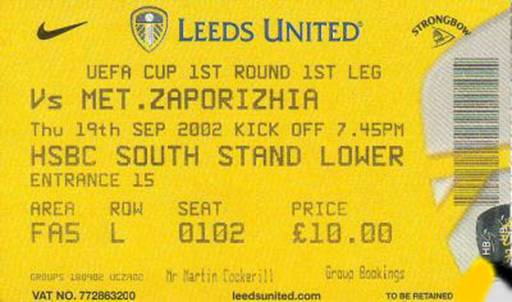 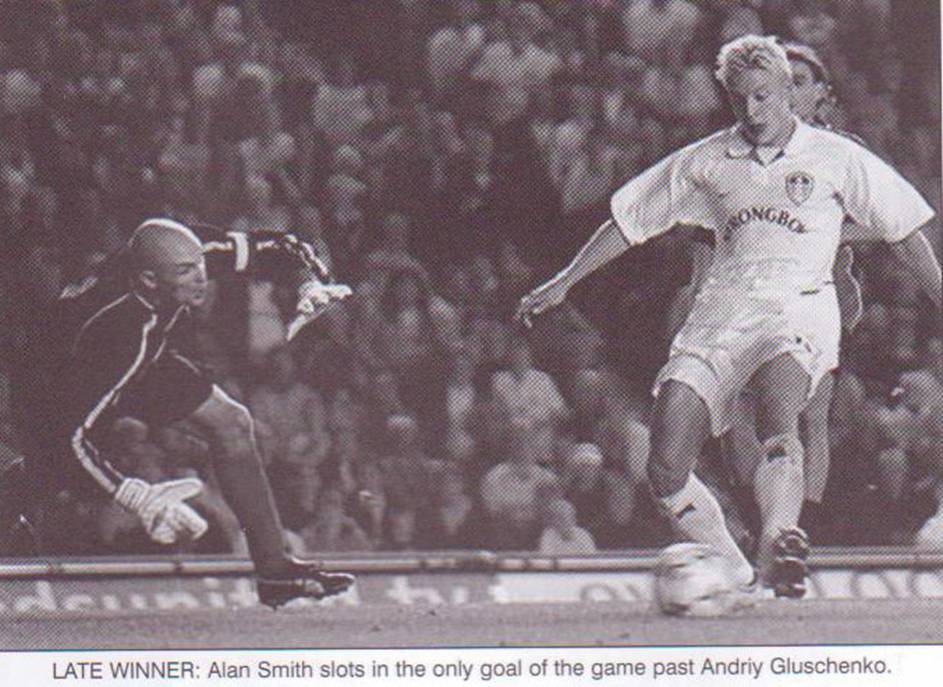 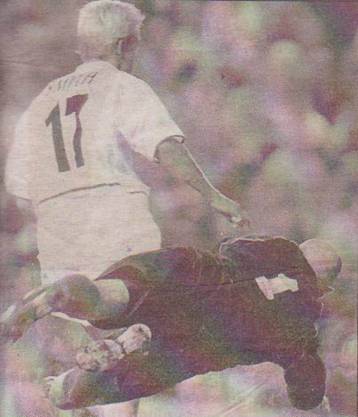 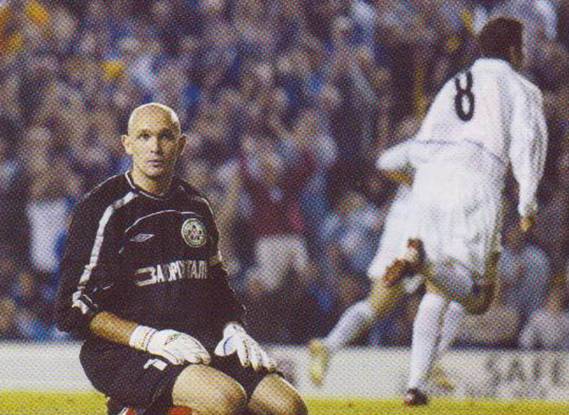 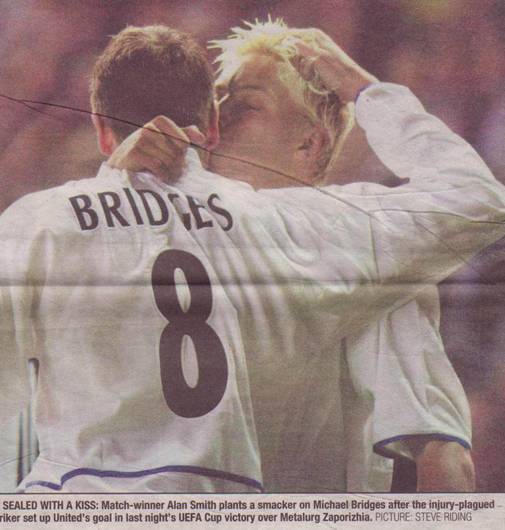 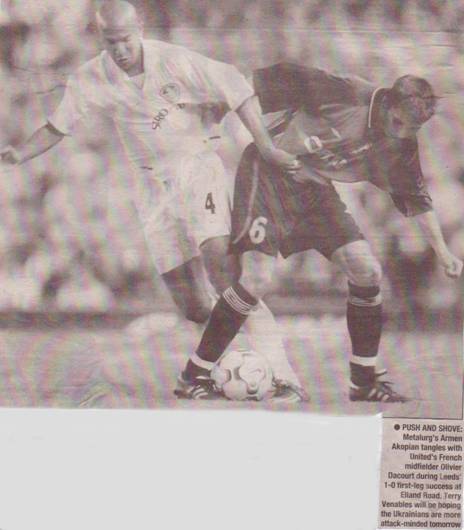 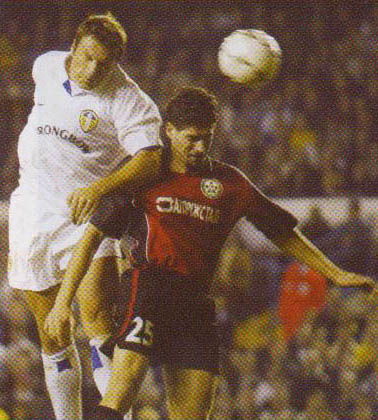 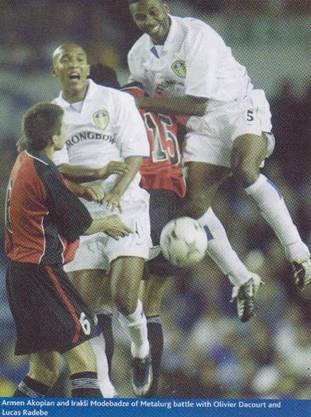 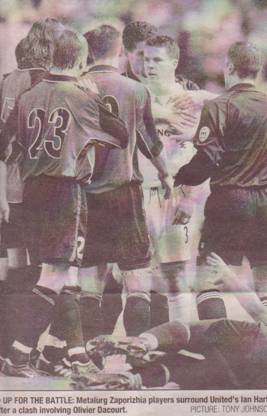 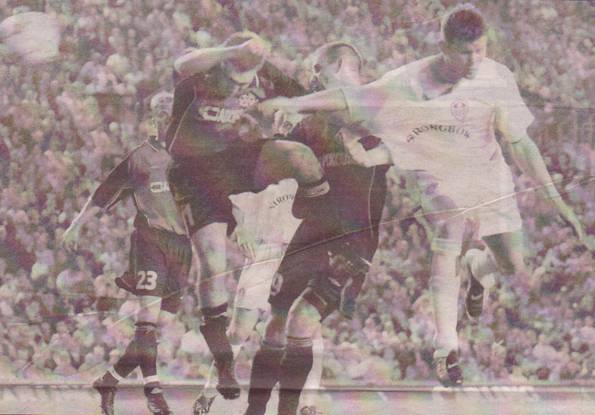 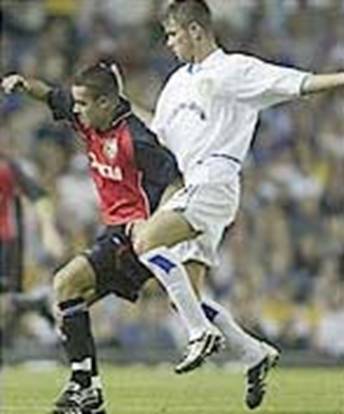 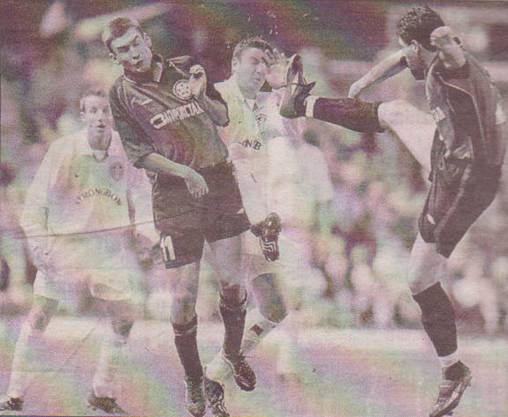 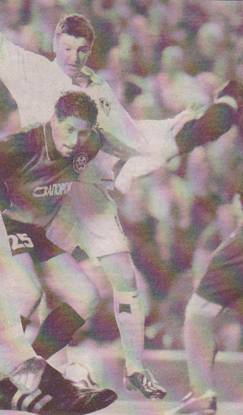 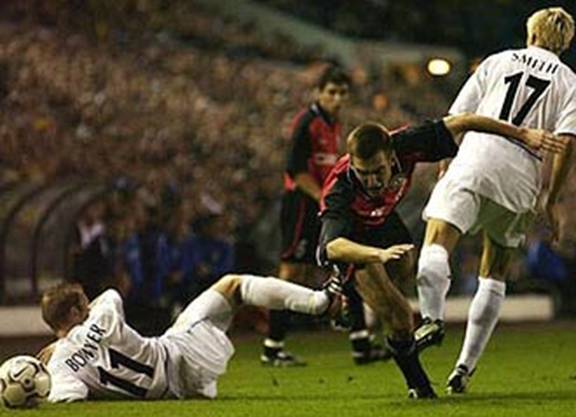 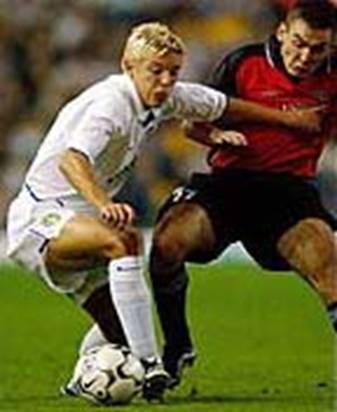 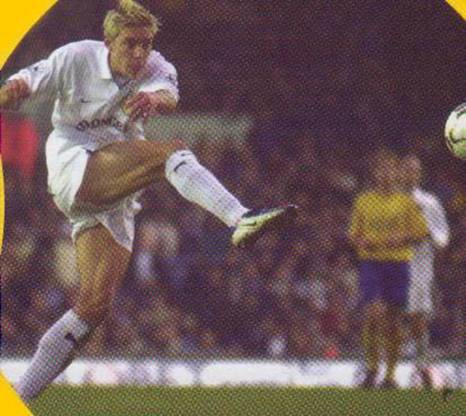 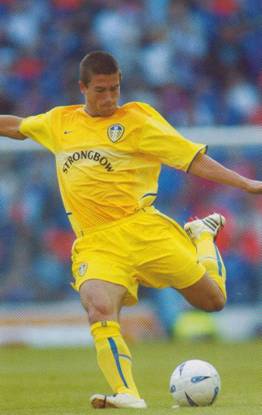 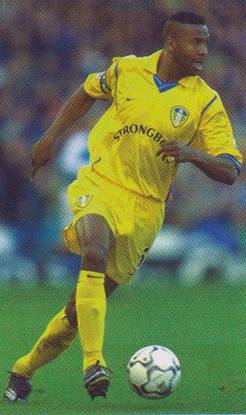 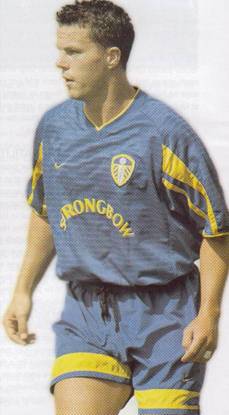 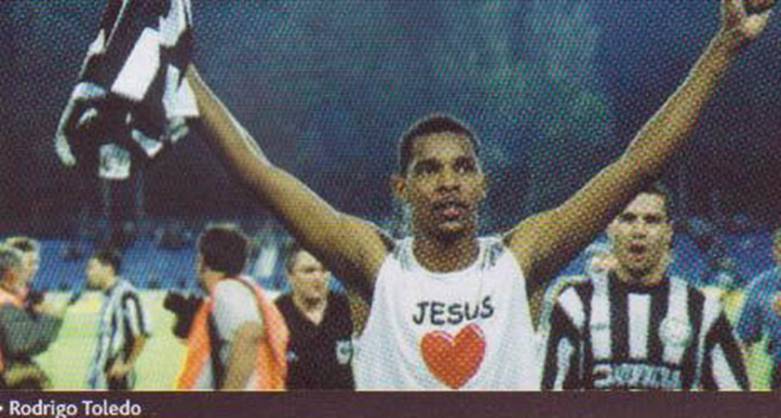 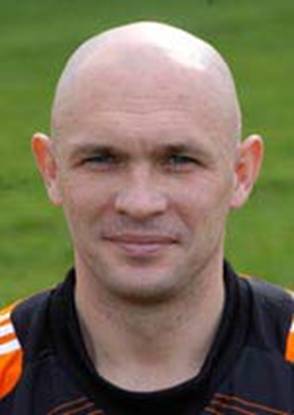 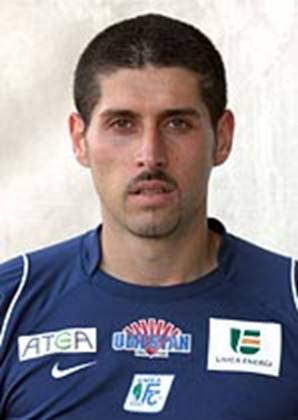 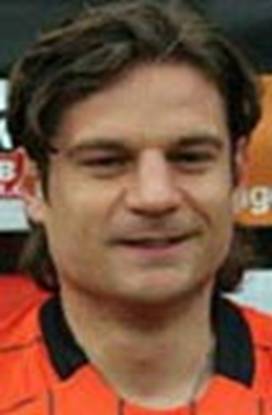 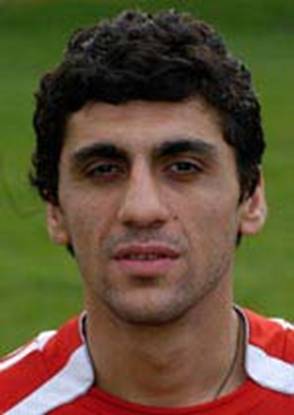