During his early career with Leeds United Trevor Cherry had been the only senior player who was not an international, but he was the record-saving hero when threatened to smash United’s impressive unbeaten record. As usual Don Revie’s men were chasing hard in pursuit of the League Championship and after kicking off the season with seven straight wins, including wins at Arsenal and Tottenham, they had remained unbeaten in twenty-six League games when Chelsea were the visitors to Elland Road in February 1974

United welcomed back Terry Cooper for his first League match since breaking his leg at twenty-two months previously. He had done so well in the away FA Cup-tie at , after only two reserve games, that Don Revie had little hesitation in including him in the side to face . It had been a long road back to fitness for the Yorhshireman and his inclusion was the moment he had long been waiting for. Cherry however retained the left-back duties while the ex-England World Cup star was given the left-wing role. Striker Allan Clarke was also back after a lengthy absence but leading scorer Mick Jones and schemer Johnny Giles were missing due to injury and illness respectively.

, now managed by Dave Sexton, had been one of the division’s most inconsistent sides and had fallen to the fringe of the relegation zone. They were battling hard to pull clear and with giant central defender Mickey Droy and David Webb imposing figures at the heart of the rearguard, United found it difficult to get going. Indeed, in the first half were the more fluent footballing side and reaped their reward five minutes before half-time when they shocked United by taking the lead.

The goal, a header, was scored by Bill Garner, the former Southend United striker signed by for £100,000 the previous year. At that stage, United’s long unbeaten run looked to be in jeopardy but Garner’s goal provided the League leaders with just the jolt their rather leisurely start to the game needed and for the last five minutes of the first half Revie’s men gave a taste of what was to come after the interval. Urged on by the hard working Norman Hunter, United launched a determined assault on the goal and they attacked for the vast majority of the second half. But ’s resolute defence was in no mood to give much away and United’s effort brought only one goal, a brave and courageous header from full-back Trevor Cherry, who dived to meet a right wing cross from Billy Bremner after sixty-seven minutes.

Cherry had to stoop so low to accomplish the header that he was prostrate and munching a mouthful of grass as the ball glanced off the inside of the near post and into the net. Cherry’s defensive play over the previous few months had been better than at any time since he had joined United for £100,000 from his home club, , but he could hardly have picked a more opportune time in which to open his league goal tally for the season. His goal breathed life into United and only a fine save from Welsh international goalkeeper John Phillips, who was keeping the experienced Peter Bonetti out of the side, prevented Peter Lorimer from putting United ahead.

Cooper marked his return to league football by showing plenty of skilful touches as he re-adjusted to the tempo of First Division football, but not even his tricky ball control could get much change from the defence. Despite the heavy rain, a bitter swirling wind and the general unpleasantness of a February afternoon, more than 41,500 spectators were at to see United draw 1-1. It was proof that if a team is producing the goods spectators will be there to savour the enjoyment no matter what be the weather.

It was ironic that on the day when they attracted the biggest crowd in the Football League, United should have had an off-day. At least their unbeaten record was still intact after twenty-seven games and it remained so for another two games before it was broken in a 3-2 defeat at . United went on to win the championship, having won twenty-four, drawn fourteen and lost only four of their forty-two fixtures. Trevor Cherry eventually became a full international and made twenty-seven appearances for , some as Captain. 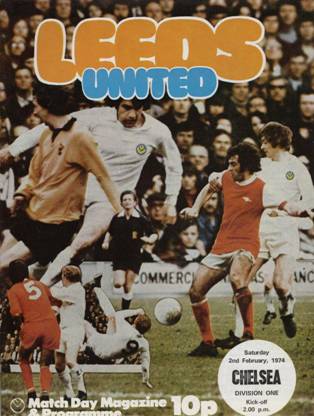 Trevor Cherry dives in to score the United equaliser 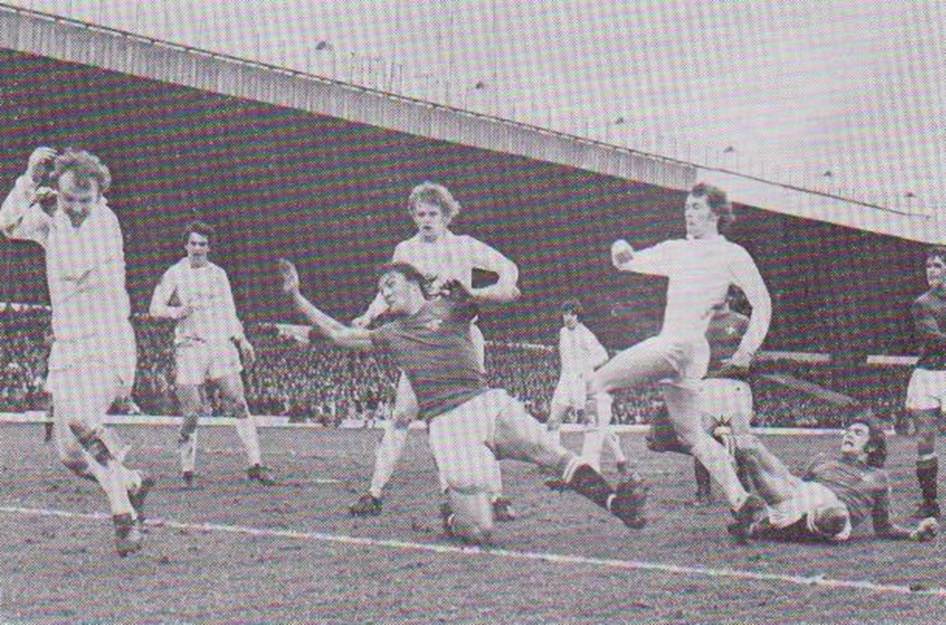 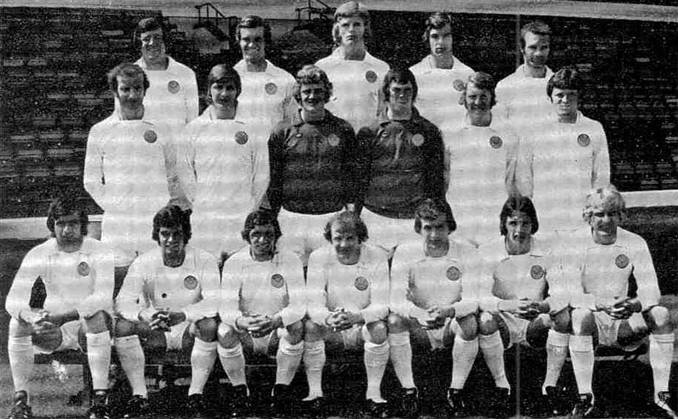 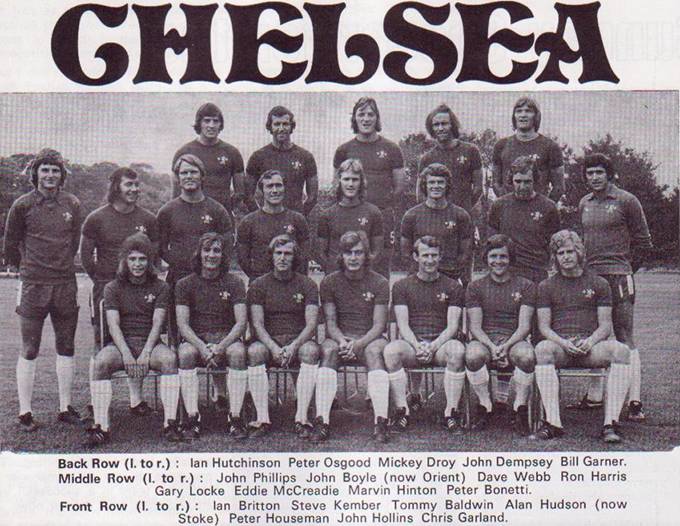 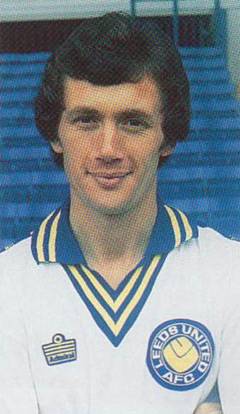 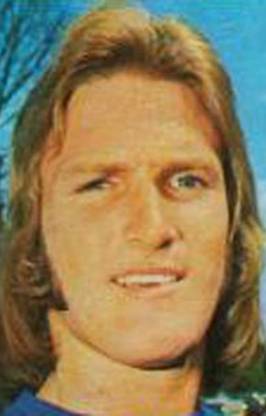 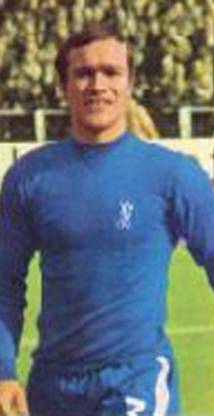 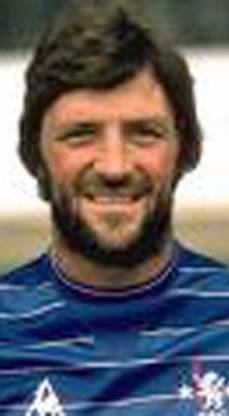 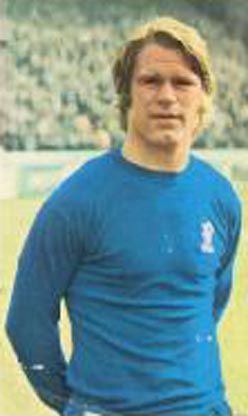 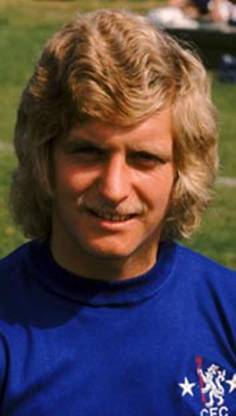 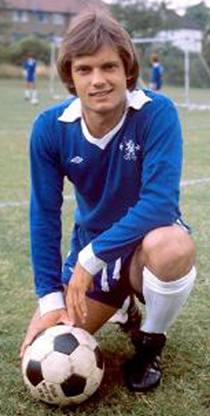 Micky Droy and David Webb were the central defenders.  Chris Garland and Bill Garner, the Chelsea scorer, were the strikers 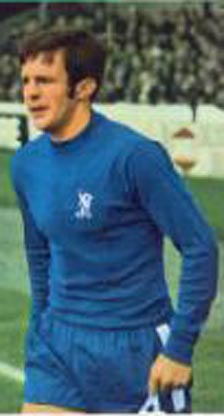 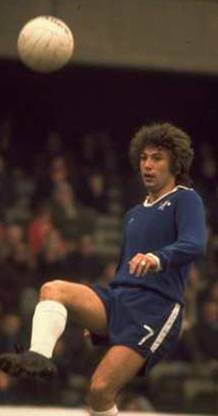 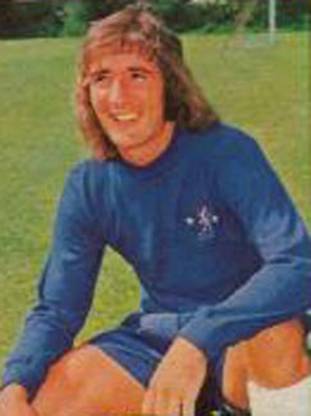