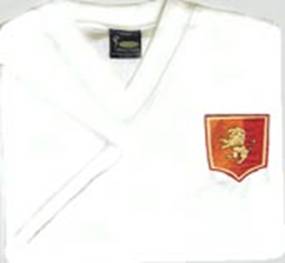 United were drawn against Maltese side in the First Round of the UEFA Cup in 1979. Only Eddie Gray and Paul Madeley remained from United’s last game in , the European Cup Final of 1975. Paul Madeley was now almost exclusively a central defender and his partnership with Paul Hart was one of the main reasons that United had fought their way back into . David Harvey, who also had considerable European experience was in goal, while full-backs Kevin Hird and Peter Hampton, completed the back-line. Midfield was patrolled by the diminutive Welsh International Brian Flynn and Trevor Cherry with Eddie Gray and fellow Scot Arthur Graham on the flanks while powerful Ray Hankin teamed up in attack with new signing Alan Curtis as the teams took the field at the National Stadium in Gzira.

United were thankful for an Arthur Graham hat-tick at the Gzira Stadium. He opened the scoring after twelve minutes, when Eddie Gray swung in a corner which was headed on by Paul Hart and the ex-Aberdeen winger swept the ball into the net from close range. Eddie Gray struck a post with a twenty-five yard effort midway through the half before United eased towards the interval with the comfort of a second goal from Paul Hart after thirty-three minutes when the towering central defender headed in Kevin Hird’s cross from the right to leave the score 2-0 in United’s favour at half-time.

One minute into the second half United swept down the middle and Welsh International Alan Curtis teed up Scottish International Arthur Graham for his second and ’ third as he clipped the ball into the net from twenty yards. The same combination made the score 4-0 as Arthur Graham completed his hat-trick just seven minutes later after Alan Curtis had made good ground down the right to centre for Arthur Graham to lob in for the goal that ensured United’s fiftieth victory in European competition as they cruised to an easy 4-0 victory.

eased themselves back into European Competition, after an absence of four years, in the steamy heat of the Gzira Stadium in in confident controlled command. They left themselves chasing scoring records to round off their entry into the Second Round of the UEFA Cup a fortnight later at . Four goals up in fifty-one minutes against a side made up mainly of head-waiters, accountants and machine operators, were then able to stroke the ball around in the style of sides of the past in . Flynn and Curtis, who had experience ’s testing conditions before, playing for , were particularly prominent in a strong all-round team display, but the goal-scoring ace was Arthur Graham, whose hat-trick was the first scored by a player since he himself had hit one in the previous January at .

An overcast sky wiped out most of the glare that feared might prove difficult. In fact the overcast cloud cover could have put the game in serious doubt for three hours before the kick-off, a storm only five miles away at Mosta, flooded the streets of the town to a depth of three inches. A downpour like that in could have left the playing area looking like a sea of sludge. Soon after the game the harbour area was hit by a heavy storm. It was cool football together with the absence of aggravation from the terraces, which was a source of embarrassment for in the European final of four years previous, which made it sunshine all the way for .

’s concern about ’ strength in the air proved to be fully justified. They had spent three hours the previous day in training with their goalkeeper Frank Grima practicing dealing with crosses from both wings, but inside thirty-three minutes, he had been beaten twice as a direct result of winning centres from the right wing. The diminutive side the felt the full force of Arthur Graham’s shooting, as the Scot hammered home the rest of ’ goals, to leave the Maltese side with their heaviest home defeat in European competition. Considering the awkward bounce of the ball, the tricky sandpit of a pitch, and the sauna-like heat Leeds’ effort was all the more commendable and a fitting way to complete their fiftieth win in Europe. Jimmy Adamson, the Leeds Manager had said that a goal-less draw would have been a good result. officials thought their side would be beaten 2-0. In the event, doubled their best score-line of the season.

The compact stadium was packed to the seams with 18,000 spectators and hundreds more crammed on the rooftops of the overlooking buildings. brushed aside ’s enthusiastic opening in comfort and moved ahead with their first serious attack. After twelve minutes Alan Curtis swivelled well to force Frank Grima to turn his eighteen yard shot for a corner. Eddie Gray took it. Paul Hart’s power in the air was too much for the generally small Maltese defence and Arthur Graham ran through on the headed pass to poke the ball home from close range for his first goal of the season. , playing in their seventh season in , were already on their way out of the first round for the seventh time. From then on were in complete control, and apart from awkward moments when Ray Hankin was involved in flare-ups, nothing stopped ’ Mediterranean cruise to victory. Eddie Gray struck the post with a drive from sixteen yards in the twenty-fifth minute and eight minutes later Kevin Hird’s pressure down the right saw him cross left-footed for Paul Hart to head powerfully home from six yards to record his third goal of the season. The Maltese side must have been hoping for better things in the second half but killed off any comeback hopes almost as soon as the half opened. In the forty-sixth minute they swept down the middle with Brian Flynn finding Alan Curtis, who laid the ball off sharply to Arthur Graham to provide a shooting chance from twenty yards, which he accepted in style for his second goal. Five minutes later it was again the Curtis-Graham combination which saw Arthur Graham complete his hat-trick and the scoring for the game. 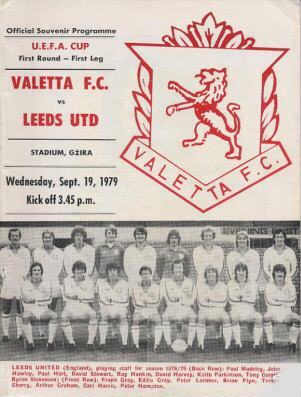 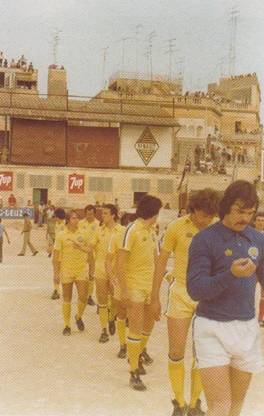 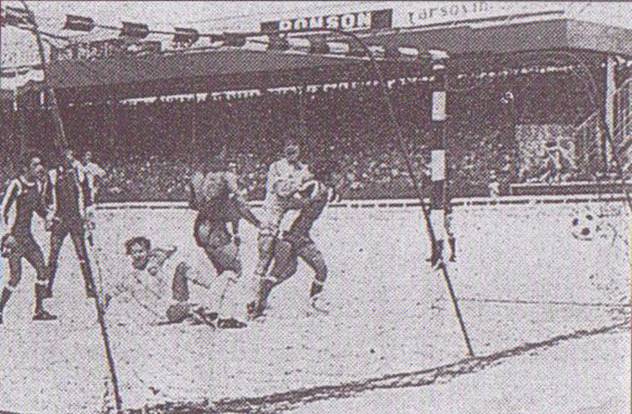 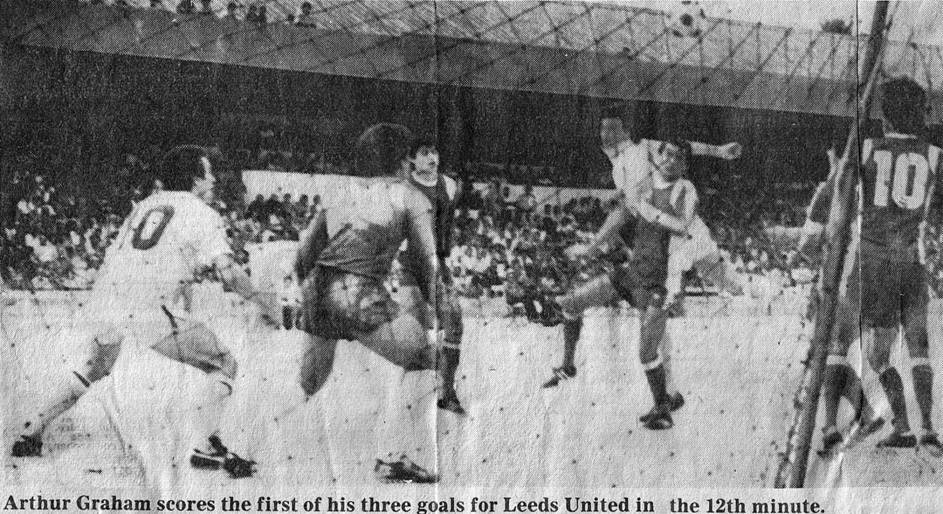 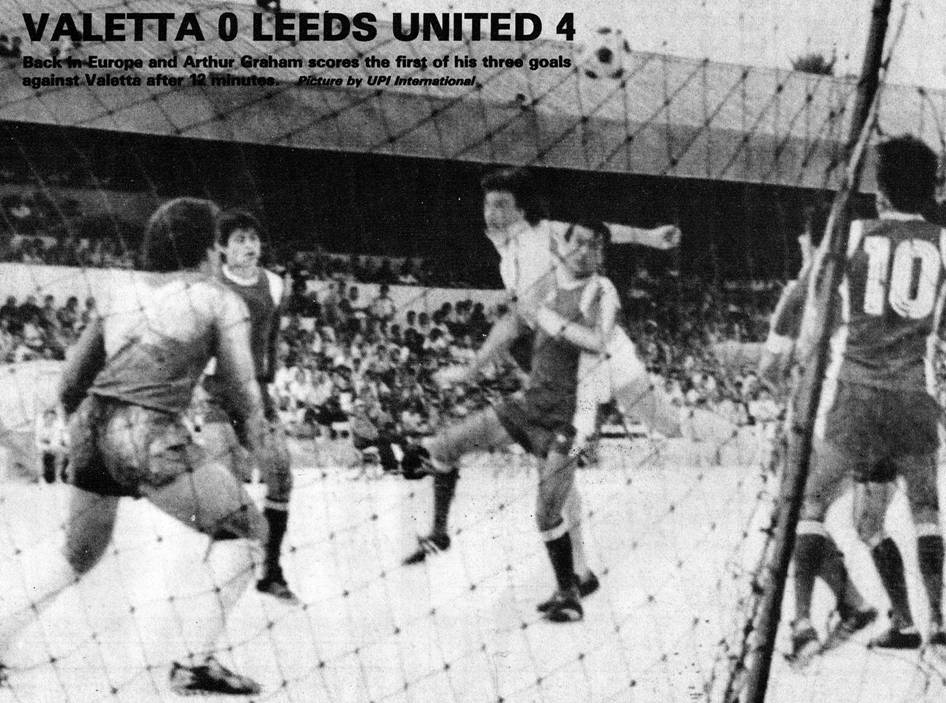 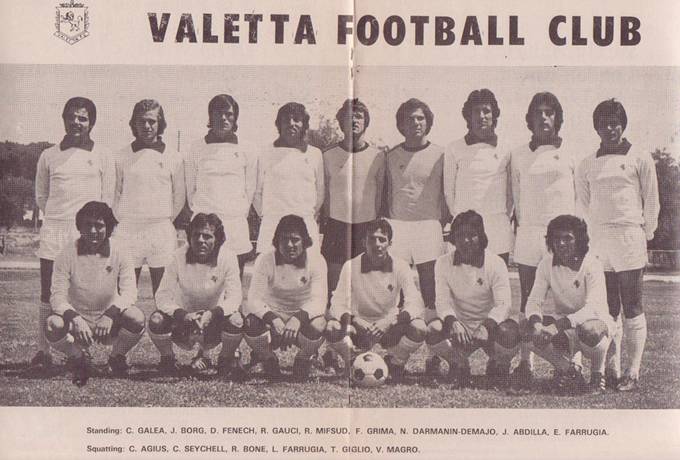 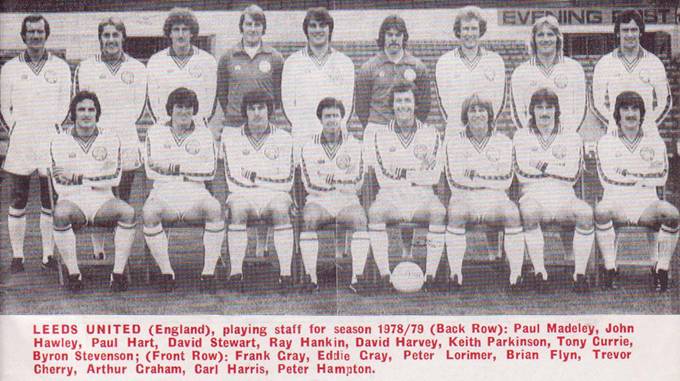 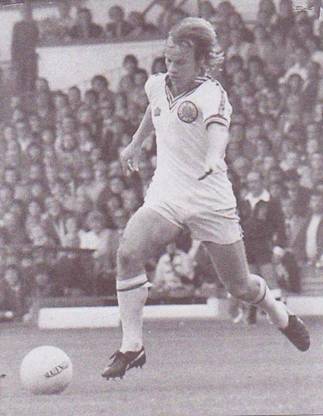 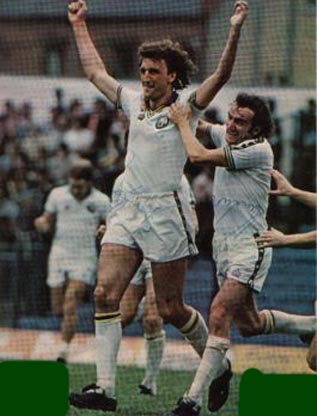 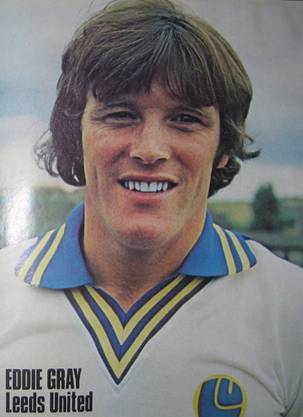 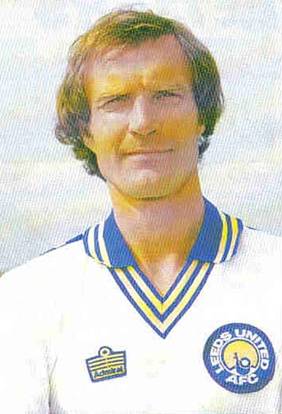